Here’s a very old local poem from near the beginning of the 20th century.

The author, who lives in Belfast, and his friend, R.C. Mackbee, go on an early summer walk in the Portglenone area.

The two men, during their day long walk, cover the Cullybackey, Portglenone area, taking in the Maine river, the hills of Lisnahuncheon, Ballyconnolly Diamond, the Loan Hill, Clough, Killyless, Lisrodden, the River Bann, and Glenone, before returning to Cullybackey.


The poet makes mention of local people, the McMasters, and Johnny Holmes’ gate.

There is also references to a ‘land of stones’ and ‘The Bullocks’ Track.’   I am unclear of what those two references are about.  Any guidance welcomed. 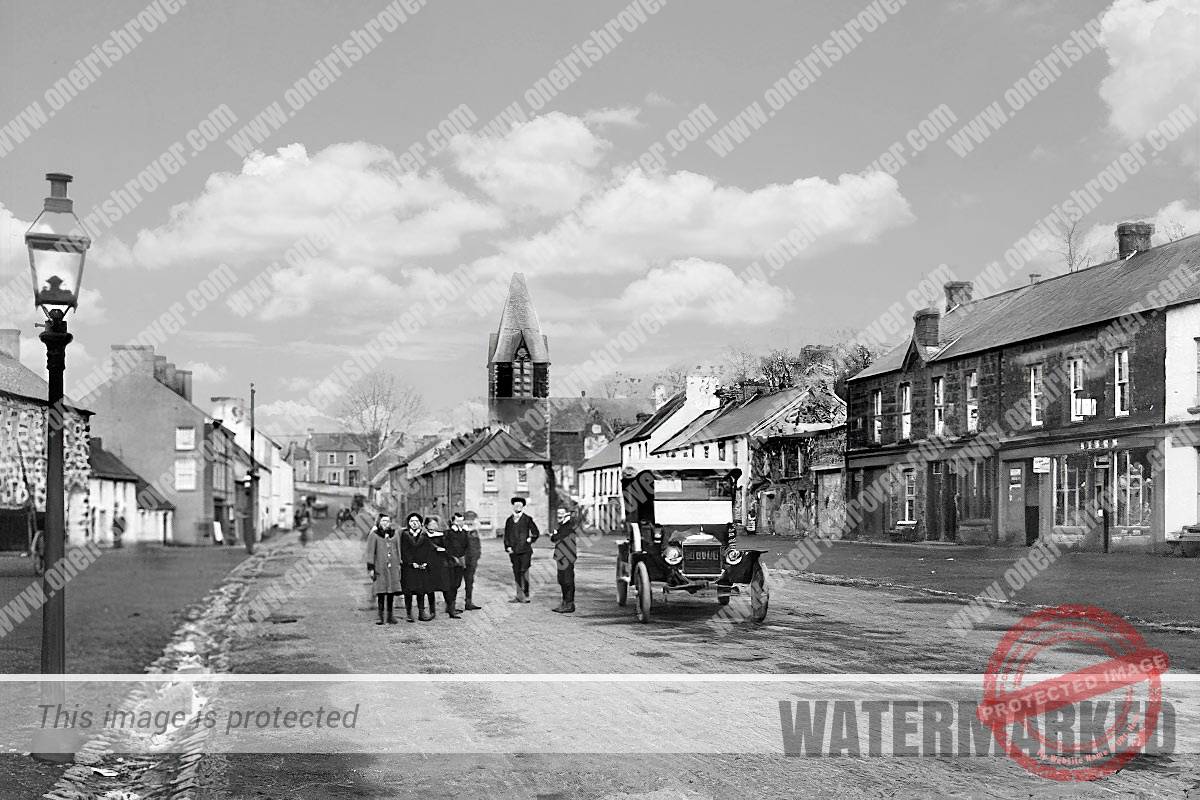 A TRIP TO PORTGLENONE

‘Twas an evening mild and mellow.
Near the latter end of May—
The year I don’t remember,
But I can’t forget the day—

When two young men set out to walk
Along a dusty road,
Stepping like men on pleasure bent
To some far off abode.

Their hearts were light, their manner bright,
Their whole demeanour gay.
And as they blithely paced along
They talked the time away.

The first was but of medium height.
Well set and sparely built.
He twirled his infantile moustache,
His stick grasped by the “hilt;”

His upper limps were clothed in black.
His lower clad in grey,
While o’er his breast a silver chain.
Bright, curbed aud sterling lay.

From head to foot, his whole attire,
Bespoke the man of taste;
His hat betrayed the gifted mind,
By art and science graced.

The other youth was not so tall.
But quite as ardent, he
Strode onward o’er the dusty path
In youthful hope and glee.

But he had no moustache to curl.
And had no stick to grip,
Although he munched the staff of life.
And stroked his upper lip.

He for the nonce that day had laid
His ledger on the shelf;
The first youth was R. C. Mackbee,
The second was — myself.

We’d made a tryst that on this eve
We’d walk to Portglenone,
Survey the landscape, cross the Bann,
And see the magic stone.

We passed Ballyconnolly Diamond, sharp.
At twenty after six;
Leaving behind a land of stones
To seek for one of bricks.

The Loan Hill rising on our right
O’erlooks the fertile plain.
And stands from Clough to fair Lough Neagh.
The guardian of the Maine.

Next, stretching westward on our left.
The barren moorlands lay.
Where heather grows in purple bloom.
And wild birds love to play.

Still on we sauntered, happy boys!
For Nature’s vernal dress—
Quito charmed us — when, a rustic scene
We reached high Killyless.

(This place, although it has no school
Of learning, dons, nor pastors,
Rears its own preachers, boasts its Hall,
And is a stronghold of McMasters!)

Yet on we walked, and soon appeared
A bog on either side.
With turf in every stage outspread,
The drying and the dried.

We met the moss folk as they came.
Toil wearied for the day;
Some said “good evening,” some again
Unheeding, went their way.

These folk are a worthy folk.
Though swart as any man,
With market baskets on their arms.
And kettles on their backs.

Solemn and silent, on they come.
Though when they meet a “bloke”
They’re ever ready salute.
Or pass their little joke.

To Lisnahuncheon’s barren hills
And heathy wastes we prest;
Then coming to another road,
We turned right to the West.

Ah! Lisnahuncheon, in your cots.
True Irishmen we find;
Loyal to creed, in race, in brogue
What novels call to mind.

And here still live the good old names
Your lathers loved so dear;
The Barneys, Mickeys, Pats,
The Biddys, all are here.

And the old Celtic O’s and Mac’s
Within these cots are found:
And the old faith, and the old tongue
Here still maintains its ground.

And still they tell the good old tales
Of ’Huncheon men that were.
And how they, many a bloody fight.
With Orangemen they did share.

And still they show the storied haunts
Of fairy, witch and ghost;
“The Bullocks’ Track,” that sacred stone
Or ancient finger post.

This stone bore on its mossy crest
A hollow, small and round,
Where every day throughout the year
Some water might found.

And of Siloam’s healing pool
In Judah’s land of old,
Twas aye believed this rick girt urn
A virtue fine did hold.

Till once upon a summer every
Some reckless youths did try
If they could overturn the stone,
And leave the basin dry.

So in the ghostly gloom of night
The stone was overcast,
When lo! the de’il, a huge black bull,
Appeared, and galloped past.

A terror-stricken crowd that night
Fled homewards mighty fast,
And death had claimed them every one
Ere half a year had passed.

Yes, they all sickened one by one.
Without apparent cause;
Yet still the water lingers there,
Defying Nature’s laws.

A devious course we now pursued.
Mid hedgerows gay with flowers,
The songsters warbling in the groves
Beguiled the pleasant hours.

The mighty hills on either side
Were clad in greenest hue;
While rose o’er the wide expanse
The cloudless vault of blue.

We traced the river’s silver thread
Amid the distant trees;
Then through Lisrodden’e narrow street,
Passed onwards at our ease.

But yet our goal seemed far away.
Nor guide, nor map, had we;
Till entering on a broader road
A silent friend we see.

He spoke not, made not any sound,
Yet told us straight and true
How far off lay our journey’s end.
What yet we had to do.

So in a trice we gained the bridge
That spans the stately Bann,
We trod the soil of fair Glenone.
And rested for a span.

Yet, feeling as on foreign soil.
On land as not our own,
We turned our steps; traversed the street,
And hied from Portglenone.

Returning by a different route
(We meant, you know to roam),
To find that Johnny Holmes’ gate
Was very far from home.

“The shades of night were falling fast,”
In fact, the moon was up.
As down the highway, through the Dreen,
We hastened for a cup

Of something to recruit our strength.
And crown a pleasant tramp—
We had it right beside the Maine.
‘Neath the domestic lamp.

It will be 57 years ago this forthcoming weekend since the awful events in Dealey Plaza. My … END_OF_DOCUMENT_TOKEN_TO_BE_REPLACED

In one of her albums, my mother kept a large (something like 8 inch by 11 inch) beautiful black and … END_OF_DOCUMENT_TOKEN_TO_BE_REPLACED