It will be 57 years ago this forthcoming weekend since the awful events in Dealey Plaza.

My parents said they were at a guest-tea (correct spelling?) in Innisrush Church Hall, on Friday 22nd November 1963.

Kennedy was shot just after mid-day, at 12.30pm Texas time, which would have been 6.30pm in Ireland.

They said that someone came into the hall, from the village, with the news that the President had been shot in Dallas. I have a feeling that dad told me who came to the Hall with the news.  But I don’t remember.

A public statement, just over an hour after the shooting, confirming Kennedy’s death, was released by White House Acting Press Secretary Malcolm Kilduff, at 1:33 p.m Dallas time – which would have been 7.33pm in Northern Ireland.

After the initial shock of the news of the shooting, the subsequent news via the radio, of JFK’s death, soon started to filter through the village and up to the Hall.  It was a night no-one would forget. A moment in time.

I know this site has subscribers from across the world.  Where were you when you heard the news of Kennedy’s killing?


For Innisrush folk, and those in the local area, where were you?

Can anyone confirm the gathering in Innisrush Hall that night?  Were you, or perhaps your parents, grandparents, uncle/aunt at the Hall?  Was it a ‘guest-tea’ or something else related to the church?  Who brought the news to the Hall?  Did any house in the area have a TV as early as November 1963? 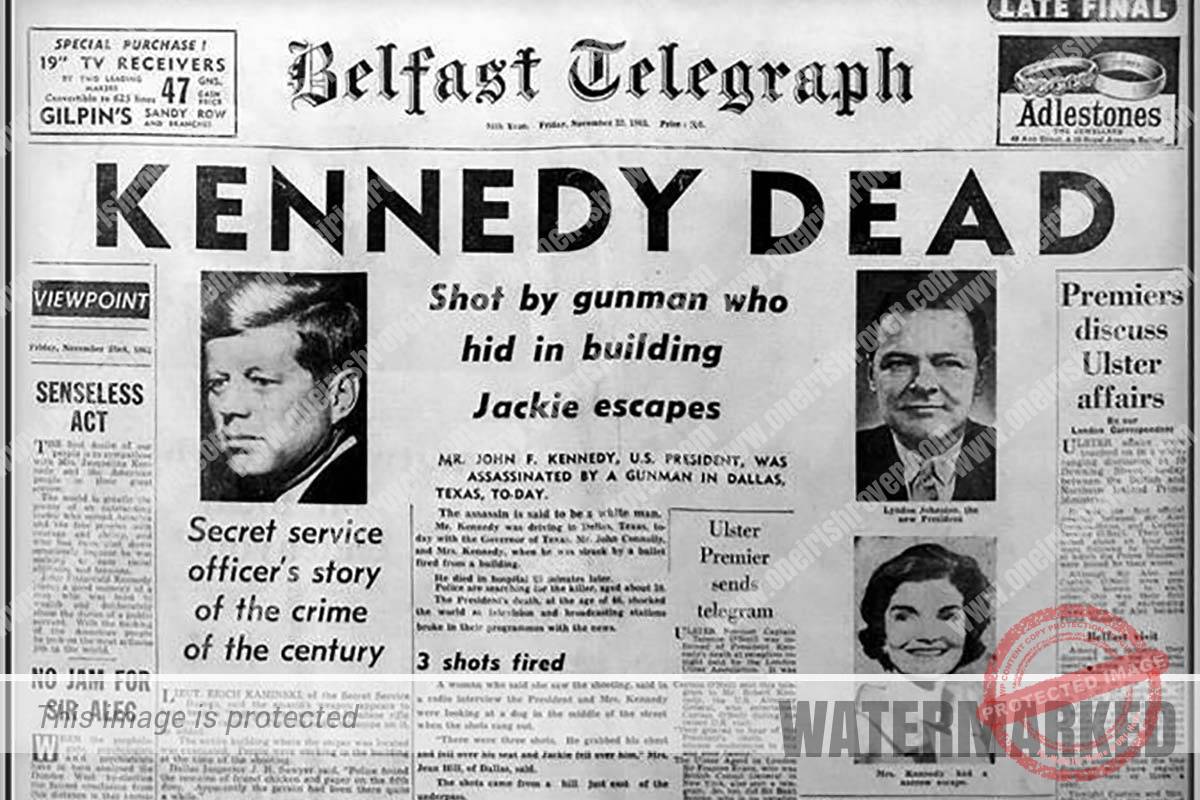 link to Henry McAnally Poem - The Banks of the Bann

In the late 1800s, the life of the farmer was very difficult.  Farm landlords could demand any price they wanted and could throw tenants out on a whim. Locals worked long hours on the land and were...

A Moment in Time My parents, Richard Mulholland and Eleanor Quinn, got married in the summer of 1961. After the wedding at First Moneymore, the wedding party drove the 34 miles northwards for the...

One Irish Rover focuses on the history and the people of the area in Northern Ireland where I grew up. Notably, the Portglenone, Kilrea, Maghera, Bellaghy, Innisrush and Tamlaght areas, in Counties Derry and Antrim.

My mother took many photos and saved loads of old newspaper cuttings. Many of these appear on this website.

June and July - took over 28,000 photos, in some 25 additional graveyards. There is much work ahead, in photoshop and with transcribing headstones.

Do NOT follow this link or you will be banned from the site!