It’s always nice to get correspondence.  I was contacted several months ago by Iben Olsen, a stamp collector from Denmark. 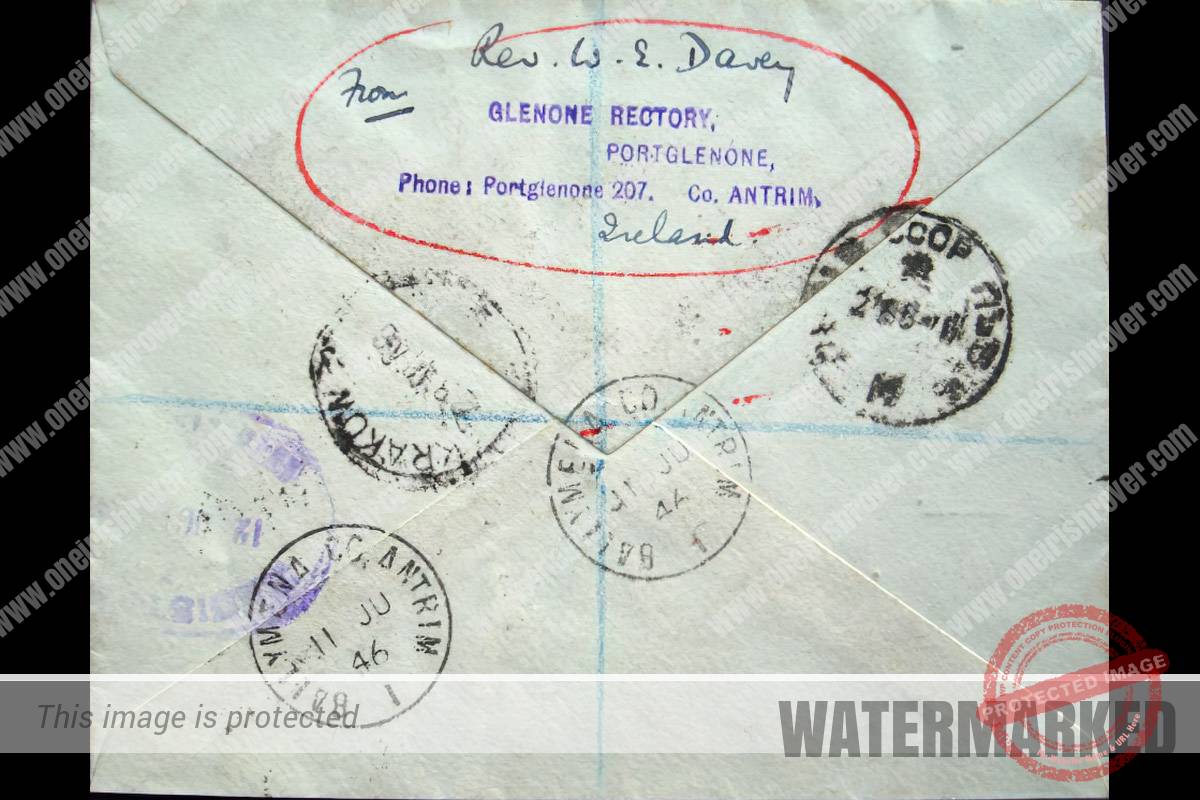 He had a fascinating old envelope in his possession, sent by the Reverend Davey, the preacher in Tamlaght Lower, in June 1946, to a man in Poland.  Iben says:

I am a Danish stamp collector with a special interest in Irish stamps, letters and history.

One day I found a registered envelope (without any content inside). It was sent on the 11th June 1946, by the Reverend W. E. Davey, of Glenone Rectory, Portglenone, Co. Antrim, Ireland.

The letter never reached Andreyej Semkowiez and was returned to the sender after a journey via CCCP (Russia), Zone Post Office 21 (in June 1946), then onto a sorting office at Krakow 28 (also during June 1946), and then returned to Ballymena.

With the knowledge that we have today, with the sad history of the area when Lwow (now Lviv – Lemberg), one imagines that the envelope today possibly indicates a sad story for the family Semkowiez – or perhaps it was just indicative of  normal difficulty in delivering post in the area after the Second World War.

The postal history and the possibility that the envelope may hold a story, gave me an idea to write an article for our Stamp Journal.Iben Olsen

Some Background on Reverend Davey

He was installed at the church in March 1944.  Many fellow clergymen from various parts of County Derry and neighbouring parishes, attended a large inauguration service on Friday 31st March 1944, in the church at Innisrush.

He spent just over four years at Innisrush and preached his final service on Sunday 31st May 1948.  He took up a new appointment as rector of Culmore and Muff. During his four years in Innisrush “all the church property had been repaired at a cost of 1200 pounds.”

By the late 1950s, Edwin Davey was the Rector  of Sion Mills and Urney, which is in County Tyrone. By 1960 he was also Vice President of Belfast Y.M.C.A. Radio Club. 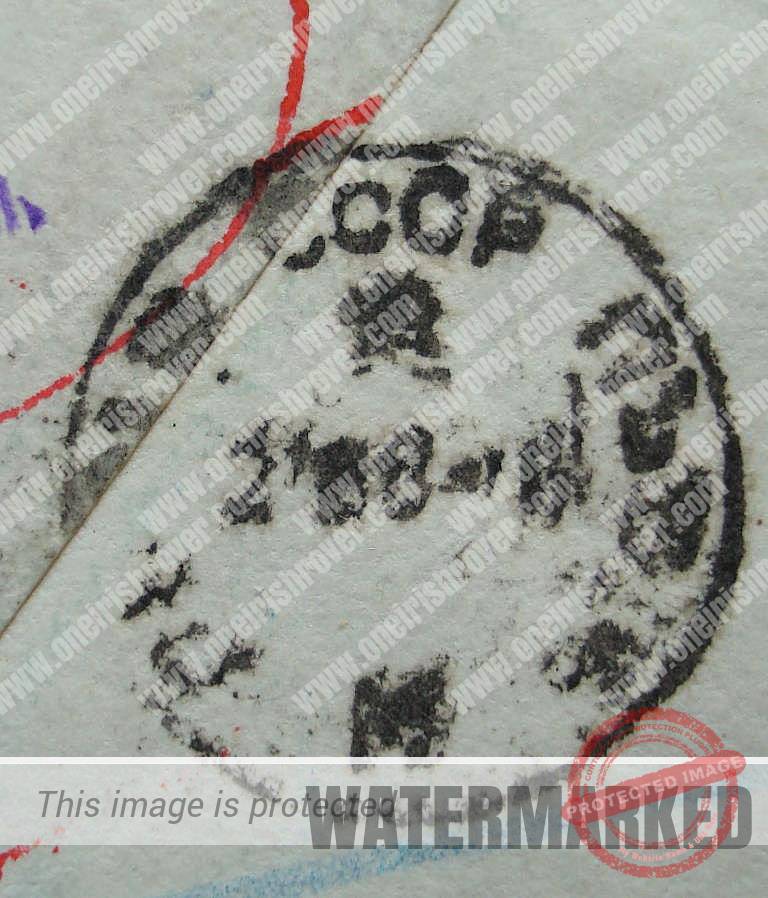 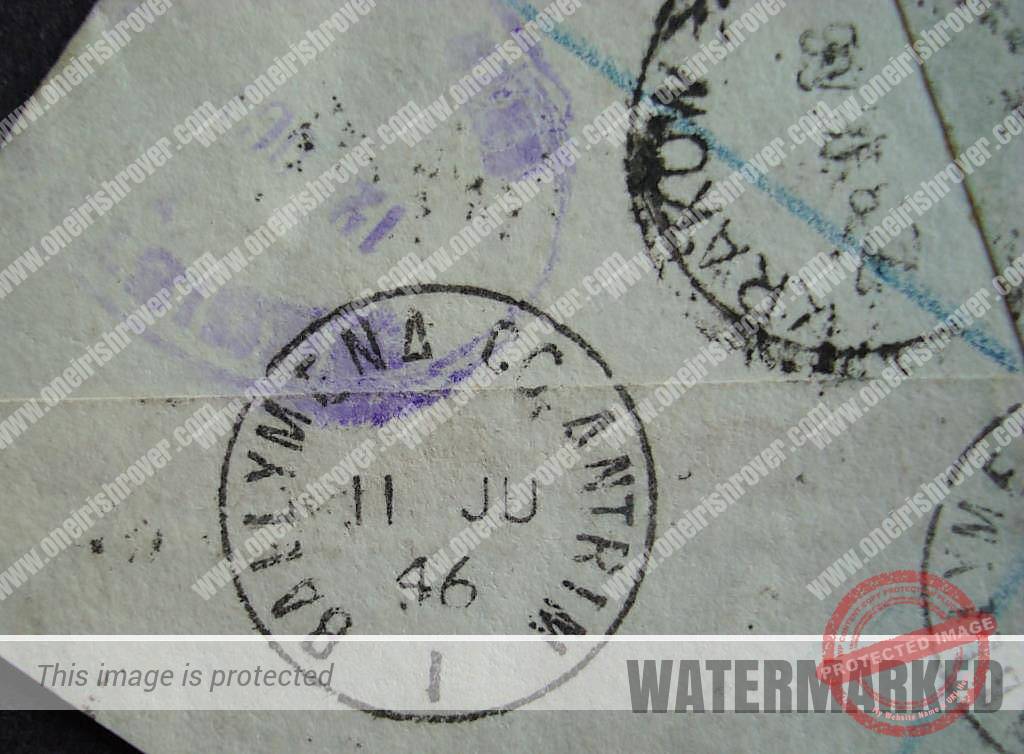 The more I thought about the returned letter (note, we don’t have the letter itself, merely the envelope), the more questions Iben and myself came up with.

Given how long ago this was, and the fact that everyone is now long since dead, we can only speculate as to the answers to these questions.

The Reverend Davey, like everyone else, would have been aware via the newspapers of the day, of the terribe events in the aftermath of the war.

At the end of the Second World War, and in the subsequent years, there was much ongoing turmoil, especially across Eastern Europe.

There were large transfers of Polish people between 1944 and 1946, from the eastern part, of what had been pre-war Poland. Poles were expelled from their homes, villages and towns. This forced migration was brought on by Russian policy, and was agreed to by the Allies.

More than one million Polish people were forced to move. They were moved in stages out of the Polish areas that had been annexed by the Russian army.

The Polish forced migrations were among the biggest of several post World War Two expulsions in Central and Eastern Europe. In total some 20 million people were displaced during this period.

A clue is perhaps in the recipient’s name.

Andreyej Semkowiez – Andreyej is a male christian name.  It has Greek and Polish origins. In the west, it is the equivalent of Andrew.  In Poland and Greece, the name means ‘man’ or ‘warrior’.   The name is used mostly in Polish speaking countries.

Semkowiez – the surname is not so common.  I couldn’t find anything directly on the name.  It seems linked to other similar names like Semkow and Senkowitz, and appears in Poland, as well as in the Eastern part of Germany.  It is most likely a Jewish name.

Persecution of the Jews

From the newspapers of the time, we see that the churches across Britain and Ireland were well aware of the terrible suffering in Poland both during, and after, the second world war.  They had been doing their best to send aid to those in need.

There were Jewish societies across the UK during the war.  Indeed the Church of Ireland (which was Mr Davey’s religious denomination) had their own society.

Here’s an advertisement I discovered from 1946, promoting a meeting in Belfast.  You will note that the speaker at the meeting is a Polish Jewish reverend.

In the Chair, The Lord Bishop of Connor. Special Offerings: Tea.

The Reverend Davey was familiar with going to events in Belfast.  I wonder if he personally attended this and similar meetings.

It’s most likely that the preacher’s undelivered letter to Andreyej Semkowiez, in the summer of 1946, was part of the church’s campaign to help the persecuted and fleeing Polish Jews in Lwow.

We can only guess that the church got the address from one of these Jewish Society talks.  Whether this particular correspondence, between the Reverend Davey and Andreyej Semkowiez, was part of an ongoing dialog, we will never know.

One would fairly presume that Andreyej was some type of representative in the area. We will never know exactly why it was undeliverable – had the mail service broken down by this point, or perhaps Andreyej was already gone from the address.

Many thanks Iben for writing to me, with this story.

Technology of the Times

Before I close, a couple of further points of note.  It was interesting to see that the Reverend Davey had a personal stamp at the rectory to quickly add his name and address to his envelopes. This possibly indicates that he wrote lots of letters.

But it was surprising (for me anyway) to discover that, here in the mid 1940s, the reverend had a telephone at the rectory.

For some perspective, the Mulhollands at Eden didn’t get a telephone til the mid or late 1960s.

Another indication of how few people had telephones in the area, was the Rectory’s phone number was 207.   Some twenty years later, when the Mulholland’s got their number, it was in the 270’s.  So in the local area, there were only some 70 new numbers handed out in the intervening two decades.  This illustrates that very few homes had a phone.

A very kind reader of this website, John, contacted this website recently, with some new information.  He tells me that: “Although the illustrations on your website do not show all of the front of the registered letter envelope, it has on it the two stamps of the Victory set of stamps from 1946 (also sometimes known by the alternative name of the Peace set). This set was issued on 11th June 1946, which – significantly – is the date the item was posted in Ballymena. It’s what collectors call a first day cover.”

John goes on to say that: “Edwin Davey was indeed a stamp collector/philatelist/postal historian of some renown. He held the office of President of the Irish Philatelic Circle (IPC) at one time and was a signatory of the Roll of Distinguished Philatelists of Ireland. The following obituary is from the March 1997 issue of Irish Philately, the Journal of the IPC.”

It was in the late 1940′ s that I first met the Reverend Edwin Davey and we had a most wonderful fifty years as friends.

On February 1st, 1997, I had a telephone call telling me that Edwin had passed away on January 29th.

For me that was the saddest night I ever spent in my 88 years of life.

Edwin was a most wonderful person and a real fountain of knowledge when it came to Irish Postal History. Everyone I know has always praised his kindness in imparting that knowledge.

While he was interested in this subject from the early 1950’s, it was not until 1984 that he was elected Vice President of the Irish Philatelic Circle. He was then elected President in 1987. Following this Presidency, he was called by the Federation of Philatelic Societies of Ireland   to sign the roll of Distinguished Philatelists of Ireland. This was an honour that he was particularly proud of.

Everyone praised his booklet An Introduction to Irish Mileage Marks, published in 1989, which is the standard text on the subject.
His health was not so good in 1996, and it was from March of that year that he had four operations.

He worked in various parishes in Northern Ireland and England and made countless friends.

His wonderful wife helped him all the time, as parishioners in Culmore will tell you, being there from 1948 until 1953.

I will end with this short epitaph –

‘Remember me is all I ask, but should it prove too great a task…forget!’
By Percy French, from the ‘Visitors’ Book’, Glenveagh Castle, County Donegal, 1909

Any donations in Edwin’s memory should be sent to Salisbury Hospice Care, Oldstock Hospital, Salisbury.

Apologies, I have not been posting much in recent months. I have not been writing anything at all. But the creativity is still there, and I have been working in the evenings, on enhancing a lot of...

I haven't been around much of late.  It's nice to get back online and have a chance to post some new material. By the way, I note there appears to have been an issue, during the past month, for...

One Irish Rover focuses on the history and the people of the area in Northern Ireland where I grew up i.e. the Portglenone, Kilrea, Maghera and Tamlaght areas, in Counties Derry and Antrim.

My mother took many photos and saved lots of old newspaper cuttings. Many of these appear on this website.

I love to delve through old newspapers, discovering and piecing together local stories. You will find originally researched articles on this website, that aren't available elsewhere. Indeed, many of the old events have been pieced together, using various resources, and are now only being told fully for the first time.